How do Venus Flytraps eat bugs you ask?

Most people think plant leaves are used for just one thing – photosynthesis. Over time, though, plants have evolved and leaves began taking on new jobs, including defense (spines), water storage (succulent plant leaves), and support (tendrils). One plant, though, has adapted to a whole new level: the Venus Flytrap attracts, detects, traps, digests, and absorbs insects, all using a single modified leaf!

A Venus Flytrap eats anything and everything small enough to fit within its trap. This usually includes bugs like beetles, spiders, and ants, but it will close on anything it can catch, including small frogs and human fingers (rest assured – no humans were harmed in the making of any films)!

To lure in unsuspecting prey, it carefully sets the trap. The trap surface is a bright red color that often attracts bugs. It also secretes a sugary nectar on the surface of the leaves to get the bugs to stay within the danger zone.

One of the most amazing things about the Venus Flytrap is that it can actually count. If you peek really close at the inside of the trap, you’ll see a few small long hairs on each side of the trap pointing toward the inside. These are actually triggers that the plant uses to sense what’s going on inside the trap. Each time a trigger is bumped, it sets off a very small electrical signal that travels across the leaf. Bump a trigger once and nothing happens. Bump a trigger twice in a row, though, and the trap shuts. This way, the trap avoids shutting for false alarms like raindrops and makes it more likely to catch wriggling bugs in the trap.

The trap is able to shut by using rapid-fire changes in the turgor pressure of the cells. Think of plant cells as balloons. When fully inflated, they’re very rigid and firm. When partially inflated, they’re very loose and saggy. (One of the reasons plants need to be kept well-watered is to keep their cells fully stocked with water. If you forget to water it, the cells lose water and the plant starts to droop.) When a Venus Flytrap senses prey, it instantly shifts intra-cellular water so that the cells on the outside of the trap become very rigid with high turgor pressure while the cells on the inside become very loose with low turgor pressure. This causes the trap to quickly snap shut.

Once the trap snaps shut on the unlucky prey, the bug starts to panic. It twists and turns and squirms around, all the while bumping up against the triggers that set off the trap in the first place. Once the triggers are bumped five times, the plant will begin converting itself to an actual stomach. It seals off the edges of the trap to make an air-proof pouch, and then begins secreting digestive enzymes to break down protein and chitin.

Admittedly, bugs aren’t very smart. If only it knew to calm down and stop moving, its captor would think it was a false alarm and would open back up in a day (albeit, a very terrifying day) so long as it didn’t trip any more triggers. Instead, depending on the size of the bug, it takes between 5 to 12 days for it to be fully digested before the trap opens back up again with just the empty exoskeleton of the bug it caught. This will blow away or fall out of the trap quite easily, and the trap is set again for the next unsuspecting prey.

Individual traps have a finite life span. They can open and close about 10 times if triggered by false alarms, or they can digest about three to five meals before they stop responding to touch. At this point, the leaf becomes just a leaf, and the plant will use it only for photosynthesis.

Why does the Venus Flytrap eat bugs?

Unfortunately, the plant has a very small range, centered around Wilmington, North Carolina, and the wild population is shrinking. Due to human encroachment and poaching (yes – it’s a thing), the Venus Flytrap is now threatened in the wild.

Regardless of the status of the wild population, though, it’s unlikely that the plant will go extinct due to its fascinating biology and ease of home cultivation. They’re easy to find online and in many garden shops in the US, and for around $10-$15, you can have your very own bug-eater extraordinaire! 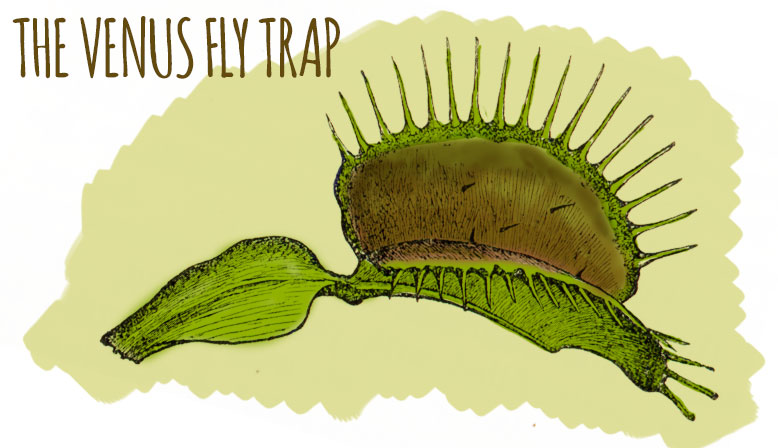 Types of string of hearts

How to propagate pothos in soil

Does lavender grow in arizona

I like to develop tomatoes. However at some point I got here out to my…

How many carbs in zucchini

National dish of the uk