One of the most common questions I get asked is “How do I know if my chicken eggs are fertile?”

And the short answer is, if you have a rooster, then most, if not all, of the eggs you collect from your hens are most likely fertile.

Are my Chicken Eggs Fertile?

If you have a rooster and a small flock of hens, you can put good money on all of your hen’s eggs being fertile.

Breeders will often separate a rooster with just one hen or up to 5 or 6 hens for optimal breeding purposes, but I’ve had as many as sixteen hens and only one rooster – and nearly every egg I cracked open was fertile.

Roosters really manage to get around the barnyard quite well! One rooster can easily mate with a dozen or more hens and fertilize all their eggs.

How Long Will a Hen Continue to Lay Fertilized Eggs?

Beginning the second day after you put a rooster and hen together, her eggs should be fertile.

And once a hen and rooster ‘hook up’ and do the deed, the sperm from the rooster is stored in the hen’s oviduct and that hen will most likely lay fertile eggs for up to two weeks afterwards.

So yes, if you have a rooster in your flock, a good percentage of the eggs you collect are likely fertile.

How Can I Tell if my Chicken Eggs are Fertile?

Also Read: Dog not putting weight on back leg

Non-fertilized eggs will have just a small, white spot or dot on the yolk which is called the germinal disc and through which the sperm enters the yolk.

If you are planning on trying to hatch your own chicks, start checking the eggs you crack to eat for the tell-tale ‘bullseye’ on the yolk. That’s the sure sign that egg is fertile. 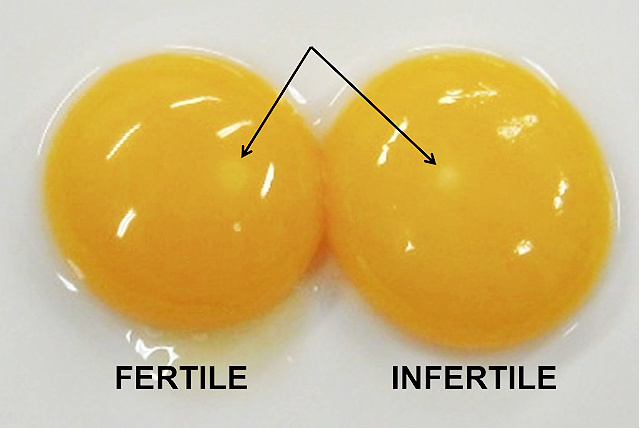 As the photo above depicts, an unfertilized egg will have a white spot, but it will be without the concentric bulls eye rings.

Those rings of the bullseye (below) are the only discernible difference in a fertile egg vs. a non fertile egg.

If you do choose some eggs to incubate, by around day four – if the eggs are fertile – you should be able to see veining and spidering through the shell when you candle it using an egg candler or flashlight.

Only then does a fertilized egg really start to look different than a non-fertile egg.

Can I Eat Fertilized Chicken Eggs?

Farm families have been eating fertilized chicken eggs for generations since every farm flock would always include a rooster for flock protection and to perpetuate the flock as the older hens stop laying.

Also Read: Cause of seizures in dogs

Will Eggs Start to Develop into Baby Chicks if I Don’t Refrigerate them?

I am often asked how you know that there’s not a baby chick, or a partially developed baby chick, inside a fertilized egg. But you shouldn’t worry about that. The chances of that are very, very remote.

Rest assured that any fertile eggs you collect and put in the refrigerator won’t develop.

Fertile eggs need to be maintained at a constant temperature of 85 degrees or more for several hours to even begin to develop, and at a temperature of near 100 degrees for 21 days in order to hatch into a chick.

Even if a broody hen has been sitting for up to four days on an egg, it will only have developed slightly.

Since the cold temperature of the refrigerator will prevent any development of the egg, you won’t find a baby chick inside that egg you crack for breakfast.

Nor will fertilized eggs you leave out on the counter begin to develop – unless you keep your house abnormally warm.

But if you have any concerns, then just collect eggs regularly from your chicken coop and refrigerate them as soon as you collect them. 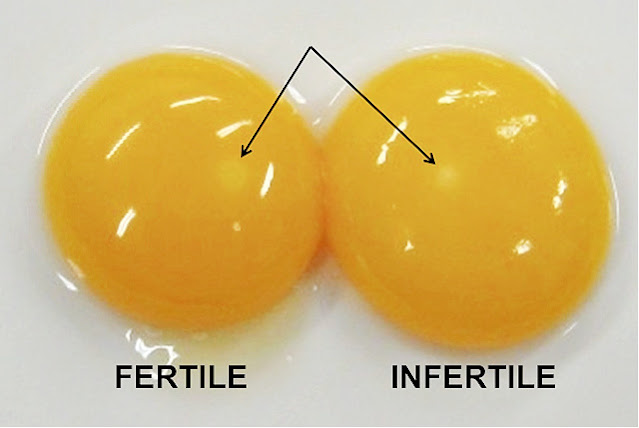 Also Read: Are gummies bad for you

One last note: A common misconception is that a spot of blood in an egg is indicative of fertility, but that’s not true. The blood is merely a broken blood vessel.

How to start an avocado from seed

You may develop an avocado tree in your house as a houseplant, whether or not…

How to make sauce thicker