This page contains affiliate links. We may earn money or products from the companies mentioned in this post through our independently chosen links, which earn us a commission. Learn More 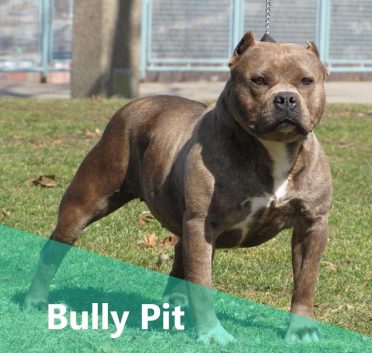 Pitbull Bulldog Mix is a cross of American Bulldog and American Pitbull also known as Bullypit. It’s a medium-size dog at about 20 to 25 inches tall and can weigh between 70 to 120 pounds. The lifespan of this crossbreed is 10 to 13 years. Bully Pit puppies cost around $250 to $2,000.

We’re setting the record straight and debunking the top 5 myths about this misunderstood crossbreed.

1. The American Bulldog Pitbull mix is as dangerous as it looks.

These dogs get a bad rap mostly because of their appearance, which can be intimidating. With the Pitbull Bulldog hybrid, though, looks can be deceiving.

How big does an American Bulldog Pitbull mix get?

This crossbreed doesn’t grow to be as tall as the American Bulldog, but its body tends to be stocky and heavy. Most Bully Pits are medium-sized, with bodies that are muscular and compact.

The Pit Bull gives these hybrids their longer muzzle. Pointed ears and a large mouth complete the face of a Pitbull Bulldog mix. Like their parent breeds, most Bully Pits have smooth coats of short, fine hair. Their coats come in a wide variety of colors, including black, brown, white, tan, cream, grey, red, and brindle.

The gentle temperament of the American Bulldog Pitbull mix

This crossbreed’s goofy smile alone can dispel any misconceptions about its temperament. As long as they receive firm obedience training and socialization at an early age, Pitbull Bulldog crosses will prove themselves to be friendly dogs who love to have fun, whether with their family or with other dogs.

American Bulldog Pitbull mixes make for sweet, affectionate pets that enjoy being the center of attention. Don’t be surprised if your Bully Pit loves making you laugh and entertaining you with his antics.

Look at these adorable Bulldog-Pitbull dogs having fun in the backyard:

One distinguishing trait of the Bulldog Pitbull mix is its loyalty to its pack. This crossbreed tends to be highly protective of its family members, using its deep voice to warn you about something suspicious in your home.

Its natural protectiveness and loyalty, combined with its intimidating, strong physique, make the American Bulldog Pitbull mix one of the best guard dogs you can get today.

2. The Bully Pit can’t be trusted around kids.

Due to their energetic, playful nature, Pitbull Bulldog mixes love being around children, especially those they grow up with. Like the American Pit Bull Terrier, the Bulldog Pitbull mix is one of the best dog breeds for kids. These patient dogs have a high threshold for pain, and they won’t be bothered by curious kids pulling on their ears and tail.

A properly trained American Bulldog Pitbull mix will also be protective of the kids in its family. It understands that your kids are higher up on the totem pole of the pack’s hierarchy, so it’s prepared to protect your kids from any harm.

3. Bully Pits are impossible to train.

The key to properly training an American Bulldog Pitbull mix is having the right attitude. The Pitbull Bulldog mix has a confident, assertive personality, so it will listen only to a person who has a similar demeanor. If you want a Bully Pit of your own, you’ll need to be able to establish your position as the dominant alpha of the pack.

With the right owner, American Bulldog Pitbull mixes will prove to be intelligent dogs who can quickly follow commands and adopt positive behavior. They’re eager to please and are comfortable with being trained specifically for your family’s protection.

You can start training Bully Pit puppies as soon as they’re 8 weeks old. At this age, they’re highly receptive of habits and behaviors that you want them to learn. By training your Pitbull Bulldog mix from an early age, you can help your dog understand your role as the alpha and its position in the pack hierarchy.

This crossbreed benefits from early socialization and leash training, and you can start by walking your puppy around the neighborhood so it can get used to being around other people and dogs.

Of course, being a dominant alpha doesn’t mean using punishment when your American Bulldog Pitbull mix misbehaves. Instead of punishing your dog, use a reward system and positive reinforcement when he follows your orders.

These hybrid dogs have energy to spare, but that doesn’t mean they’ll be happy only in homes with large backyards. Bully Pits will thrive in an apartment or condominium as long as they get sufficient exercise every day.

The Pitbull Bulldog needs 60 to 90 minutes of moderate exercise daily. It will love being your running buddy or going with you on leisurely walks around the neighborhood. They’ll also enjoy going to the dog park or to places where they can interact with other dogs and people.

If you do have a backyard, make sure to keep your Bully Pit safe by installing a fence that’s at least 6 feet tall. Like its Pit Bull parent, the Pitbull Bulldog mix is an accomplished jumper.

5. Taking care of an American Bulldog and Pitbull mix is difficult.

With the American Bulldog Pitbull mix, shedding isn’t a problem. These dogs are low shedders that don’t need to be brushed frequently. A thorough brushing once or twice a week is enough to keep their coats shiny and healthy.

You won’t even have to bathe a Bully Pit often since frequent baths will strip their coat of natural oils and may cause skin irritation. You can use a damp washcloth to wipe down the Pitbull and Bulldog hybrid every week or two to get rid of any debris in the coat.

This hybrid’s teeth and ears should also be checked and cleaned at least once a week to prevent infections.

The proper diet for a Pitbull Bulldog mix

Like its parent breeds, the American Bulldog Pitbull cross tends to gain weight easily. It’s important that you limit their daily food intake. Feed your Bully Pit 2 ½ to 4 cups of dry dog food every day to help keep him at a healthy weight.

Make sure to divide this amount of food into 3 or 4 meals throughout the day. Feeding the American Bulldog Pitbull mix multiple meals a day helps prevent gastric torsion, a serious condition that’s common in deep-chested dogs.

Dog food that’s best for the Pit Bull Terrier will also work best for the Pitbull Bulldog’s diet. This dog food contains the nutrients that the crossbreed needs to build strong muscles and joints, keep its energy levels up, and maintain overall good health.

Is the Bully Pit a healthy breed?

You can expect to enjoy many years of companionship with this dog. However, this crossbreed is also predisposed to certain genetic conditions, especially those that affect its parent breeds.

Both the American Bulldog and the Pit Bull Terrier are prone to hip and elbow dysplasia, so your Bulldog Pitbull mix may be prone to these joint conditions, too. This hybrid dog is also vulnerable to skin allergies and infections because of its short coat. Due to its Bulldog heritage, the Pitbull Bulldog cross may also be prone to respiratory problems.

Their short, thin coats also make most American Bulldog Pitbull crosses intolerant of cold weather. Make sure to bundle up your dog if you want to go out on cold days.

Where can I find an American Bulldog and Pitbull mix for sale?

If you want to buy an American Bulldog Pitbull mix, your best source is a reputable breeder. Breeders of this specific hybrid may be difficult to find, though, so your next best option is to contact breeders of American Bulldogs and Pit Bull Terriers:

The Price of the Bully Pit can vary depending on the puppy’s pedigree. Looking for a more affordable option? You can look for an adult American Bulldog Pitbull mix to rescue instead.

What we think of this misunderstood crossbreed

There’s definitely more to the Bully Pit than meets the eye. Properly trained and socialized, these dogs are friendly and loving, particularly around kids. American Bulldog Pitbull mixes are also loyal and protective, so they won’t disappoint as guard dogs.

Unfortunately, the Pitbull Bulldog mix is not the ideal pet for a first-time dog owner. This crossbreed needs a confident, strong pack leader who can provide firm, consistent guidance from puppyhood.

What do you think of the American Bulldog Pitbull mix? Tell us in the comments!

Also read: How many g in a tbsp

How many ounces does a newborn drink

How Can I Inform When My Child Is Hungry? Indicators that infants are hungry embrace:…

How to get rid of moles on skin

Care for a calla lily

How big is 12 inch pizza

How much caffeine in a shot of espresso

How do you get rid of chipmunks in the house