Let’s find out whether the black Lab German Shepherd mix is your perfect puppy! We’ll look at their temperament, appearance, behavior and training needs. And what you will need to do to care for your puppy and raise them to be a friendly member of the family.

A black Lab German Shepherd mix dog is a large, athletic cross with a thick, double coat. Labs and German Shepherd Dogs were first bred to fulfil quite different purposes. So, their mixed breed puppies can have very different temperaments. But for adaptable owners with a passion for training, they can be great dogs. In this guide, we help you decide if they could be your perfect match.

Black Lab German Shepherd mix dogs are sometimes also known as German Shepradors, or Labrashepherds. But besides wondering what to call them, people frequently have many other questions about them too.

We’ll answer all these questions here!

Let’s start by finding out where the black Labrashepherd came from.

Designer dogs – the result of deliberately crossing two different pedigrees – are a relatively recent phenomenon. Labs and German Shepherds are currently America’s two most popular dog breeds, so it’s no surprise that they’ve been popular choices for breeders interested in producing hybrid litters. But the Labrador and German Shepherd pedigrees both go right back to the 19th century. And understanding their individual histories provides important insights into German Sheprador temperament.

Labradors were originally bred as hunting dogs, to retrieve fallen waterfowl from the water. Breeders selected breeding dogs for traits which made them great at this job: a strong build, a thick waterproof coat, and an enthusiasm to learn and work in a team with their handler.

The best Labs were also gentle and chilled out companions once the hunting day was over. Which is why Labradors exploded so successfully onto the pet scene, and into service roles as well.

German Shepherd dogs, or GSDs, were originally bred to be the ultimate herding dog. Unlike Labs, GSDs needed to be able to work confidently at a distance from their handler. They also used to double up as watch dogs and guard dogs, alerting their owner to the arrival of anything unfamiliar, which might be a threat to their flock. Like Labradors, they also proved to be remarkably versatile, and succeed in a wide variety of roles – including police work, military work, narcotics detection, and service roles.

What to Expect From a Black Lab German Shepherd Mix

The whole purpose of establishing pedigrees for purebred dogs is to ensure that all the puppies descended from that pedigree look and behave in a reliable way. Inevitably, mixing breeds creates possibilities for unpredictable results. Puppies inherit traits from both of their parents at random. It’s impossible to guarantee that a mixed breed puppy will only inherit the best features of both their parents! Even within the same litter, some puppies might look a lot like a Lab but behave like a GSD, and others might look like a GSD but act like a Lab.

Color and pattern inheritance in dogs is pretty complicated, so reserving a black Lab GSD mix puppy before they’re born doesn’t necessarily mean that you’re securing a dog of a particular color. 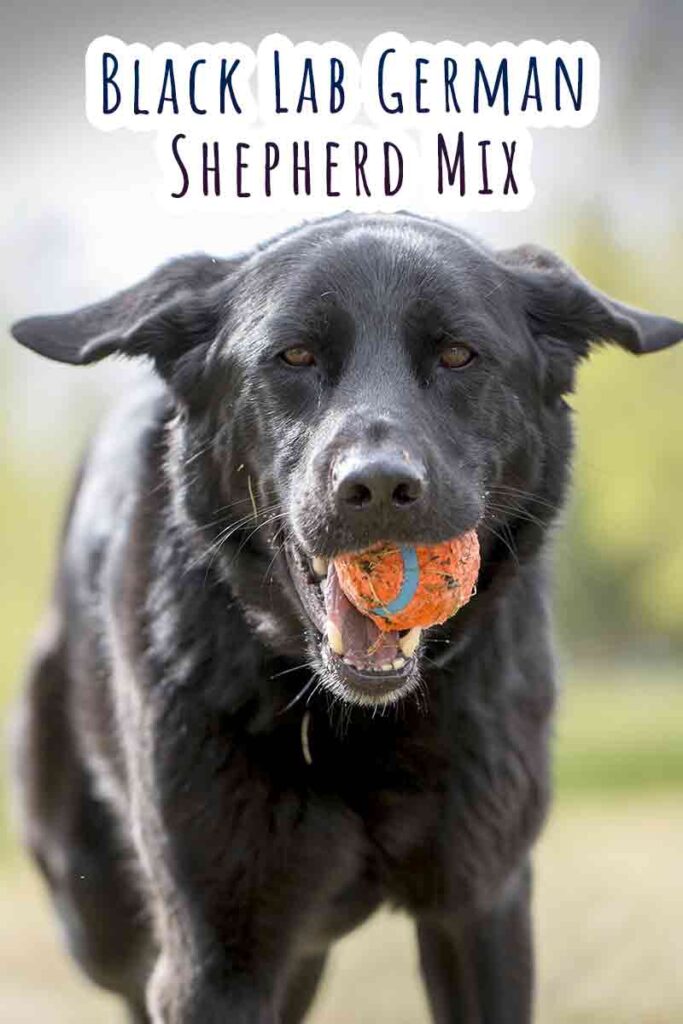 Black Labs can also carry the genes for chocolate and yellow coloring. Some Labs also silently carry the genes for markings like tan points. These genes hark back to when Gordon Setters contributed to the foundation of the breed. Meanwhile, the GSD’s handsome coat is subject to a number of different genetic possibilities.

So a black Lab German Shepherd mix puppy might be black or dark brown, and have markings including sable shading or tan points.

How big do German Shepherd black Lab mixes get?

Labradors and German Shepherds are both medium to large sized dogs. Labs weigh 55 to 80 pounds, and GSDs weigh 50 to 90 pounds. For both breeds, females tend to occupy the bottom end of the weight range, and males the upper end. So, a black Lab German Shepherd mix could weigh anything between 50 and 90 pounds too. Their weight will be partly determined by all of the following:

Labs and GSDs both have thick double coats – ideal for insulating them against harsh weather conditions whilst working. They both shed heavily, and ‘blow their coat’ twice a year in spring and fall – which means shedding even more prolifically while their new season’s coat comes through. So, one thing we can say for sure about the black Lab German Shepherd is that they too will be high-shedding dogs.

Regular brushing, and seasonal grooming with specialist tools like a Furminator can help to keep your house clear of discarded fur.

Labrador Retrievers are famous for being friendly. Besides an irrepressible enthusiasm for making friends with anyone and everyone, they’re also playful and smart. They also have a strong retrieving instinct – or in other words they like to carry things around in their mouths! Black Labs in particular have traditionally been favored for working roles, so they tend to be focussed and easily motivated to engage in training.

German Shepherds are often described as courageous and loyal. They have strong herding and guarding instincts. Part of this is an innate distrust of unfamiliar people. Although, they are devoted and affectionate to their human family and regular guests. They are also very smart, and capable of picking up new cues quickly.

What this means for black Lab GSD mix personality

Labs and GSDs have quite different personalities, shaped by different instincts. But they are both talented problem solvers and quick learners. Sheprador puppies are sure to be smart and trainable too. But it’s impossible to predict whether they will be naturally outgoing and socially confident like a Lab, or more reserved and wary of unfamiliar encounters, like a GSD.

Unfortunately, a black Lab German Shepherd mix puppy’s temperament is not a reliable indicator of what they will be like as an adult either. So, the training and socialization you do with them while they are young will be very important.

Socialization is the process of introducing a young puppy to all the experiences they’ll need to be confident around when they’re older. Puppies under 12 weeks old readily form positive associations with new things, if they have a good first encounter with them. Socialization is particularly important for German Shepherds and their mixes, because they are naturally inclined to be wary of strangers. It gives them the confidence to interact calmly with the world when they are older.

Typically friendly breeds like Labs still need socializing too. And very friendly individuals will also need teaching how to greet people calmly, without jumping up or getting over excited.

German Shepradors also need methodical leash training from a young age – being dragged along the sidewalk by a large dog is no fun!

Labs and GSDs are both athletic dogs which have been bred to be mentally and physically active for several hours a day. An adult Lab GSD mix dog needs at least 2 hours of walking per day. At home, they enjoy additional games of fetch, tug and scent work.

Training and puzzle feeders like Kongs and sniffle mats are valuable for providing mental exercise. A Sheprador is also likely to enjoy dog sports like fieldwork and advanced obedience training.

Just like in every other respect, Sheprador health is a mixed inheritance from both of their parent breeds.

Labrador Retrievers are prone to

All of these have a hereditary component, which means potential breeding dogs can be screened for them in advance.

Allergies are also a common problem in Labradors, and have a genetic component. Unfortunately however, there is presently no DNA test for vulnerability. So, ask your breeder whether there is a family history of allergies instead.

German Shepherds are prone to

In recent years, an increasing number of GSDs have also been bred for a specific outline, where their back slopes dramatically down to their hind legs. This causes stress through their spine and the joints in their legs, increasing the risk of painful arthritis.

And finally, due to their deep chest, GSDs are also at high risk of bloat.

Caring for a sick dog is stressful, upsetting, and frequently expensive. To avoid this, look for a Sheprador puppy from health tested parents. Keep them at a healthy weight, to protect their joints. And familiarise yourself with the symptoms of bloat, so that you’re prepared to act quick should it happen to your dog.

Owner surveys indicate that Labradors live for 12-13 years on average, and GSDs live for 9-13 years. Both of these compare well with the all-dog average life expectancy of just over 11 years. And a black Lab German Shepherd mix dog can expect to live beyond their 10th birthday too, maybe even to their early teens.

Labrashepherds make good pets for very active people, who have plenty of time to engage with and train their dog. Since they’re intelligent, and bred to work, they are likely to get bored and frustrated if they don’t receive several hours of interaction every day. They might express that through unwanted behaviors such as digging, chewing, and barking.

This mix isn’t a wise choice if you’re relying on your dog being sociable and outgoing, or on the other hand, doubling up as a watchdog. They might not inherit these qualities!

All dogs should be supervised around young children, but Shepradors especially so, due to their size. However, they are well suited to households with older children because they tend to be affectionate and patient with their human family. And energetic kids are great companions for energetic dogs!

Many people would like to adopt an older dog rather than purchase a puppy. For the right owner, this has several advantages. An important one for German Shepherd Lab mix dogs is that you’ll get a clearer idea of what temperament they have inherited.

Since Labs and GSDs are extremely popular in their own right, Sheprador dogs aren’t unusual in the rescue population. There are also a large number of breed-specific rescues working with Labs and GSDs, which might also help to rehome mixes.

If you would rather raise your dog from a puppy, you’ll need to find a reputable breeder to purchase one from. Unfortunately, the popularity of designer dogs has made them something of a commercial success for puppy farms. But, puppy farms do not health test parent dogs, or socialise puppies in their care.

Dogs from puppy farms are more likely to have health problems and behavioral problems which are difficult and expensive to manage, and spoil your relationship. So, be extra vigilant when looking for a breeder to avoid unscrupulous ones. They can be very convincing, and give slick pre-rehearsed answers to your questions. This article will help you spot bad breeders and move on!

Do you already have a Black Lab German Shepherd mix? We’d love to hear all about them in the comments below.

Also Read: How to stand out as a pet sitter

How to make y turn

Planting grass seed in the fall

Why is my ivy crunchy