Best beer for beer can chicken

Do you love beer, chicken, and grilling? Then this article is for you. Beer can chicken is one of the most popular foods to cook on the Pit Boss pellet grill. But which beers pair best with chicken? Luckily for you, there are plenty of beers out there that fit the bill. But does the type of beer you use actually make a difference?

What’s The Best Beer to Pair With Beer Can Chicken?

The best beer to pair with beer can chicken is a matter of personal preference. It’s best to choose a cheap beer or one you like drinking since you’ll likely be stuck with some leftover you’ll have to drink and it doesn’t add any flavor to the chicken. The purpose of the beer is to hold the chicken legs closer to the heat source than the breasts, resulting in a juicier chicken. This is why it’s totally fine to use any type of beer, soda, apple juice, or even an empty can. 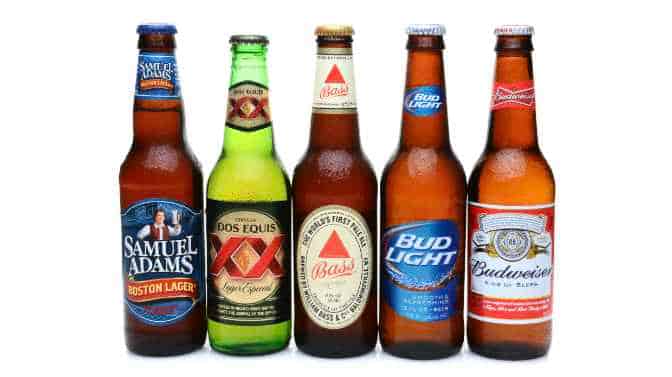 Does It Matter Which Beer You Use for Beer Can Chicken?

This has always been a huge debate in smoking forums online. Some people say it doesn’t matter which beer you use, while others say it does.

I’ve only cooked beer can chicken once and used a Corona beer. The only thing I noticed is the chicken was juicier than cooking a regular whole chicken.

Here’s a comprehensive step-by-step guide on how to cook beer can chicken on a Pit Boss pellet grill.

Why Doesn’t Beer Flavor The Chicken?

This video discusses in complete detail of why it doesn’t matter what type of beer you use when cooking beer can chicken.

The reason being is that water boils at 212°F and beer at 170°. The cold cavity of the chicken sits on top of the beer can. Therefore, the beer won’t ever get any hotter than the chicken, even if you overcook the chicken to 170-180°F.

Therefore, the beer never evaporates to produce steam to help flavor the bird.

That said, some people like experimenting with different types of beers when grilling beer can chicken. And who knows you might just find a great-tasting beer you love cooking with.

So in this article, we’ll look at some of the most popular beers on the market, what they taste like and whether or not they go good with chicken.

Types of Beers to Use for Beer Can Chicken

At the time of this writing, there are more than 100 different styles of beer in the United States alone, and that number is always growing. So it’s not uncommon for people to be confused about which types of beer to use for beer can chicken, especially, if you’re not a beer drinker.

Porters are a great choice, but you could also experiment with other dark beers like stout or black lagers. You can even use a Pilsner or your favorite IPA. The choice is endless, and the best part is you don’t even have to buy canned beer, all you need is a bottle.

So let’s take a closer look at the types of beers on the market and what they taste like.

An IPA is a type of beer that is typically hoppy. When you hold the glass, you’ll often notice a malty, earthy flavor with caramel notes.

Craft beers are great for use when cooking chicken because it packs a lot of flavors, especially, if you use a floral IPA. According to Bon Appetit, an IPA like Bear Republic’s Racer 5 has a great citrusy flavor that pairs great with chicken recipes.

Stout beers are typically dark and strong bitter beers. There are several variations, but they are known for their flavors of coffee, chocolate, and caramel sweetness.

Guinness is the most popular stout. In fact, it’s not hard to find chicken recipes online that call for a Guinness beer. However, the best Stout for chicken is one that has sweet dark chocolate and roasted flavor like Bell’s Kalamazoo Stout.

It has a full blend of aromas with a significant hop presence that won’t overpower the chicken. There are several Stouts on the market, even porters that would taste great with chicken, so be sure to shop around.

These beers are usually lighter more refreshing ales that have a fruit flavor. They can be flavored with any type of fruit such as citrus and berry flavored, some breweries will use pineapple, watermelon, papaya, and other types of fruit.

The beers can have a tart or sweet flavor, making them challenging to know which ones will taste great with chicken. A peach ale such as Four Peaks Peach Ale is great for cooking different chicken recipes.

Sour beers are made with various types of yeast and bacteria and they typically taste sour. They might also have a funky flavor as you’d get from eating yogurt.

Some of the beers include fruits like cherry, peach, raspberry, etc, which helps create a balance of sweet and sour flavors.

The type of sour you’ll want to use when cooking chicken is called a kettle sour aka quick souring beers such as the Berliner Weisse or Gose, which you can find on the shelves at your local beer store.

Pilsners are beers with a strong hoppy flavor (not as strong as IPAs), lighter in color ranging from light straw to golden. Saaz hops is what differentiates a Pilsner from a Lager. The saaz hops have a kick to them, making the Pilsner a spicier beer.

They have a dry and crisp after taste, but you can also experience a variety of flavors from hints of malt to a slightly spicy flavor.

Also Read: What is in chai tea

Most Pilsners you’ll find at your local grocery stores or beer stores will be more expensive than a pale ale or a lager. That said, you could still use them for chicken where you’ll want to balance the flavors with others like hops or spices.

Belgian wit beers are a type of beer that you’ll find available to you in different variations. They are typically pale and cloudy you’ll notice the Belgian yeast flavor you get from these types of beers.

There are several variations you’ll want to explore, but you can expect flavors like coriander, orange peel, and grapefruit. Although these beers might seem like they’re sweet some flavors will give off a hint of spicy fruit accents, which pairs well with chicken and other meats.

Chili Infused beers are different than chili beers because you’re infusing the flavor of chili in the beer. Chili-infused beers are typically brewed with spices like hot pepper juice, oils, or actual peppers such as jalapeños.

The infusing of spices usually consists of augers, porters and IPA’s, but the base of the beer can vary.

This type of beer starts off sweet but ends up with a nice spiciness you can taste. These flavors work well to compliment spicy chicken recipes you might find on the internet and can be used with beer can chicken.

An example of a chili-infused beer you might want to try is Smoked Porter with Chipotle Peppers or Habenero Sculpin which you can find at a specialty store that sells craft beers.

Any domestic beer such as Budweiser, Michelob Ultra, Bud Light, Coors Light and etc can be used, especially if you’re on a budget. These beers don’t have the same fruity, sour, or unique taste like an expensive craft beer.

But you don’t need to use an expensive beer to make beer can chicken. So, you can use any beer you already have in your fridge.

It doesn’t matter what type of beer you use to cook beer can chicken. But it doesn’t mean you can’t experiment with different flavored beer to see if there’s a difference in taste.

Hopefully, the beers above will help you get started with experimenting so you can see if it makes a difference. After all, the only way you’ll ever know is to try it yourself.

Who knows, you may just find a new beer you love drinking while you’re grilling!

Also Read: Where can i find screwball ice cream